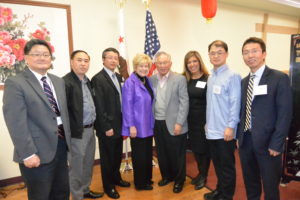 “We are pleased to announce our endorsement of Bonnie Dumanis for the board of supervisors. Based on her excellent  local public service record,  SDAAFE believes that Mrs. Dumanis will be an effective leader on the Board of Supervisors on day one, with unique insight into some of the most significant challenges facing San Diego.”, said Shawn He, president of SDAAFE.