The newly appointed president Shawn He described three main focus of the organization for 2018:  adhering to the non-partisan independent political stance held by SDAAFE; mobilizing against actions that are detrimental to the interests of Asians, particularly Chinese Americans; mobilizing support for efforts that will help advancing social status of Asians, especially Chinese-Americans; promoting SDAAFE’s motto of “Engage to Empower”;  recruiting more volunteers; striving for more like-minded people to join the organization and expanding its influence in Asian communities and beyond; building up the organization and improving its functions; paving the way for the long-term development of political involvement for Chinese Americans. 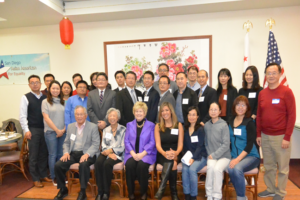