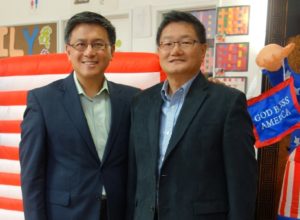 “John Chiang is committed to making investment in education a top priority as governor, and has always supported in breaking the political ceiling” said Steve Hsieh, Vice President of San Diego Asian Americans for Equality. “Being a child of immigrants, John has sought to help Asian Americans and Pacific Islanders have a greater voice in the political process. He has been vigilant in watching over state finance and fought against corruption in local governments. It is our pleasure to endorse his run for governor” .