“Since announcing her intention to run, DA Stephan has captured the backing of county deputy sheriffs, police officers, probation officers, district attorney investigators, and county prosecutors and their political action committee. ” said Steve Hsieh, Vice President of San Diego Asian Americans for Equality. “SDAAFE joins the ranks to rally supports for her because of her extensive background in prosecuting felonies including homicide, sex crime and human trafficking. Her long term  leadership in crime fighting and her devotion to protecting children and family are praised by SDAAFE. It is our pleasure to endorse her campaign for District Attorney” . 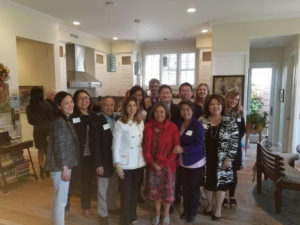 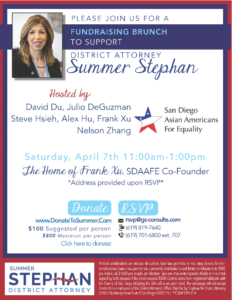 The Asian Pacific American Coalition in the San Diego Region (APAC) successfully held its sixth annual meeting at the Town and Country Resort & Convention Center on March 10th. Many community leaders, corporate executives, non-profit organizations and current government officials gathered to participate in this annual event. The Asian Pacific American Coalition is a community-based, non-partisan, non-profit organization that aims to foster citizens’ active participation in politics and promote the influence of San Diego Asian-Americans in the United States. Members of SDAAFE were invited to attend the event. 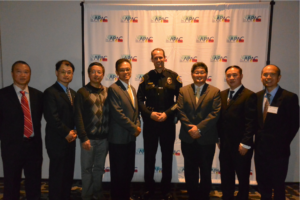 SDAAFE board members, Police Chief Nisleit (the 5th from left) and APAC co-founder Dr. Chan (the 4th from left)

The purpose of Mayoral Award is to recognize those high school students who have demonstrated strong willingness and made significant efforts in civic engagement, revealed extraordinary leadership skills with proved accomplishments, actively participated in community outreach programs as well as maintained academic excellence in school.  By recognizing these students, we hope to discover next generation leaders for our Chinese American community.

Here are general guidelines to those who apply for Mayoral Award:

The application deadline is April 16, 2018.  To apply, click here , and submit the following required material :

To ensure complete impartiality in selection of recipients and to maintain a high level of professionalism, the Mayoral Award Committee will consist of respected local community leaders as well as executives from local industries.

The final recipients of the award will be notified after the selection process is completed.

The mayor of San Diego will present the award to 4 recipients from Chinese community at San Diego City Council at a date to be determined.

If there are any questions about the Mayoral Award, we encourage the student to contact ACA or SDAAFE directly by e-mailing info@acasandiego.org or info@sdaafe.org with the subject line: 2018 Mayoral Award (applicant name).

Alliance of Chinese Americans San Diego (ACA) is a nonprofit (501c3) organization dedicated to serving the Chinese community of San Diego.  ACA assists Chinese newcomers in achieving the American Dream, by working to create and maintain an inclusive, diverse, and harmonious region.  ACA promotes policies that advance its core values – equality, freedom, and justice – and advocates on behalf of every individual’s right to life, liberty, and the pursuit of happiness.