The California legislature passed AB-329, the California Healthy Youth Act (CHYA), in 2015, and it was signed into law by democrat Governor Jerry Brown on October 1, 2015. The new statewide guidance for health education, the Health Education Framework, was written to be compatible with CHYA in 2018 and was approved by the California State Board of Education (SBE) on May 8, 2019. The ACLU and a group known as the California Adolescent Sexual Health Work Group (ASHWG) have provided lists of curricular materials they say comply with CHYA. Two of the most commonly used sex ed programs that the California Department of Education (CA DOE) has promoted through ASHWG (https://www.cde.ca.gov/ls/he/se/curriculum.asp) are Rights, Respect, Responsibility (RRR) and Positive Prevention Plus (PPP).

All of the instructional materials promoted by ACLU, ASHWG and CA DOE have one thing in common: they infuse children with the idea that gender is on a spectrum and that our science that supports a gender binary (male and female) is outdated. For example, the CSE program Be Real, Be Ready, Lesson 4: Sexuality: Sex, Gender, & Orientation, teaches the following: “Students will understand gender as a spectrum, not as a binary.”

Furthermore, children will learn that gender is not just for men and women. In this new way of thinking, gender has nothing to do with the reproductive organs; rather, it is only related to personal feelings. As the gender spectrum shows, there are countless possibilities for the gender of the middle person, from the male end to the female end. For example, one person could be 30% man and 70% woman, neither man nor woman, both man and woman, and so on.

The lesson goes on to state: “Pass out the Genderbread Person worksheet. Gender Identity: How a person, in their head, thinks about themselves.” In short, the content of this lesson is to teach children that their gender depends on feelings, and they have the right to decide their own “real” gender.

However, does this idea of a gender spectrum really have a scientificly proven basis?

When against the Department of Health and Human Services’ plan to distinguish humans as men and women, the editorial board of the famous Nature magazine published a commentator’s article entitled “US proposal for defining gender has no basis in science,” it seemd that they represented the party of scientific justice. But if you read this article carefully and do a little research, you will find that it actually proves the gender spectrum (including transgender) does not have sufficient scientific basis to be taught as fact in public schools.

First of all, there is no final scientific conclusion that someone can be born transgender. The article acknowledges as much when it states:  “Some evidence suggests that transgender identity has genetic or hormonal roots, but its exact biological correlates are unclear.” That is to say, there is some evidence that may indicate that gender dysphoria (which sometimes leads to a person’s adopting a transgender identity) may have genetic or hormonal roots, but, nevertheless, such actual biological causes are not clear.

In order to give the impression that transgender ideology is somehow backed by science, the article is followed by a sentence that claims, “Whatever the cause, organizations such as the American Academy of Pediatrics (AAP) advises physicians to treat people according to their preferred gender, regardless of appearance or genetics.”

The implication is that even this famous pediatric association is advising doctors to treat patients according to their preferred gender. Doesn’t this mean that transgenders have been confirmed by the medical community? The AAP specifically issued a statement in October 2018 that states otherwise. Although it does emphasize its support for the children of transgender, it has to be mentioned that “Professional understanding of youth that identify as TGD is a rapidly evolving clinical field in which research on appropriate clinical management is limited by insufficient funding.” In short, professional research in this field is very limited and does not form any conclusions.

So what is transgender?

The American Psychiatric Association (APA) mentions transgender on a Q&A about gender dysphoria, and it clearly reads: “Transgender is a non-medical term that has been used increasingly since the 1990s.” In other words, it does not recognize that transgender is a medical vocabulary. The APA specifically pointed out that the term transgender was only used frequently for some reason after the 1990s.

So based on the official statements made by the AAP and APA, it would be hard to consider a transgender orientation as a natural sexual inclination. It seems to be more of an emerging social phenomenon driven by activists as there is no definitive scientific evidence that proves people are born with a transgender identity.

In the link of United Nations (UN) World Health Organization (WHO) on sexual orientation, three examples have been used to prove that the transgender phenomenon has been around for a long time, including Thai Shemale, the Berdache tribe in North America，and the fa’afafine on the Pacific island Somoa. If you look closely at these three examples, though, you can find that most, if not all, of these so-called long-established transgender cases are not naturally formed. Instead, those cases are closely related to the culture there.

Debie Hayton, a transgender, published an article in The Economist in 2018 where she emphasized that transgenders should be basing their claims on evidence, not just personal feelings. However, the reality is people, including legislators, are using circular reasoning”. Obviously, circular reasoning is not a good way to justify those legislators’ transgender bills. However, the sex ed programs that many schools are using throughout California, teach as fact that children can choose their gender based on subjective feelings— yet this does not have scientific basis.

As the advocator of CSE, the United Nations Educational Scientific and Cultural Organization (UNESCO), in its 2018 International technical guidance on sexuality education (first edition, 2009), the fourth chapter, asserts it is the evidence base for CSE; it also explicitly recognizes the limitations of so-called CSE research. It specifically mentions that “researchers are more likely to try to publish articles if positive results support their theories. Additionally, programs and journals are more likely to accept articles for publication when the results are positive.”

Obviously, if only positive results are published and negative outcomes are purposely left out, the true reliability of the various studies on CSE that we can see at present is also very doubtful. For example, Stan Weed’s study is left out from the report, which clearly shows that CSE has been an utter failure.

Also, the UNESCO guidance states that one of CSE’s goals is for prevention. However, the reality is that Sexually Transmitted Disease (STD) cases have increased for 3 consecutive years from 2015 to 2017. Somehow CSE has failed miserably.

In summary, science has not proven that transgender identity is innate or that people can be born with a gender that falls on a spectrum. CSE programs that promote gender identity ideology should be carefully scrutinized because their claims about human sexuality appear to be based on belief instead of reliable science.

Despite the lack of scientific evidence, the California legislature still mandated that CSE be taught in California public and charter schools (once in middle school, once in high school, and optionally in elementary school). What kind of negative impact will this have on our children?

Let’s take a look at the real situation of the sexual education now, and discuss what we can do to protect our children. We invited parents, children, and TOC (The Orange Club) experts to share their personal experiences and legal opinions. For our next generation, please be sure to come.

And please RSVP at 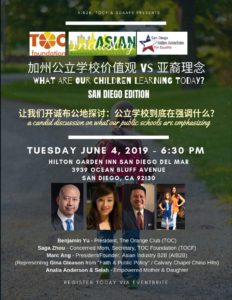